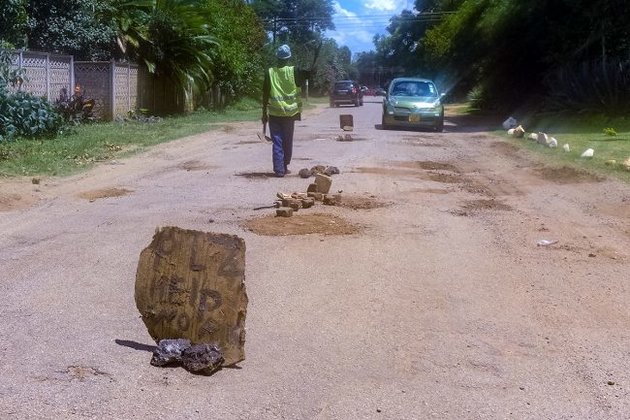 In Zimbabwe: They Fix the Road for Tips, But Are They Really Helping

Jobs In Zimbabwe: They Fix the Road for Tips, But Are They Really Helping? view team

Amateur repair crews who fill potholes in Zimbabwes roads may be doing more harm than good, but some repairmen say earning tips by working on the road is the only way they can feed their families.

HARARE, ZIMBABWE The heat is scorching, but Warren Chireka labors on at a strenuous job: patching potholes in a tarmac road in this capital citys Avondale neighborhood.

This is a volunteer job, but hes been working at it for three years now. He stands right in the middle of the road as cars swerve past him. Some cars pause to show appreciation for his work, or to give him tips.

He counts on those tips as his pay.

I ask for donations from those who want to help me, he says. Those who do not want [to], I dont force them.

Chireka stands near the repairs hes made on a road in the Avondale neighborhood of Harare, Zimbabwes capital city. He says tips from drivers help him feed his four children.

On a good day, Chireka can earn up to $30. Other days, he walks away with $10. His work tools include a shovel and a small piece of metal that he uses for digging.

Amateur road repairers, including Chireka, have popped up all over Harare to fix potholes by filling them with sand or stones. Theyre mostly concentrated in affluent areas, where they feel they have the best chance of getting good tips. Formal jobs are scarce in Zimbabwe some estimates suggest that unemployment here is over 95%. People often find ways to make money however they can.

But the Harare city council is encouraging drivers to stop giving tips to these unofficial repairmen. Those workers do more damage to roads than good, says Zvenyika Chawatama, the citys director of works.

They leave rubble on roads that sometimes includes wire, which can damage tires, he says.

In some cases, the workers make it appear as though theyre fixing potholes during the day, but they undo that work during the night so they can return the next day and get more tips, Chawatama says.

There are safety concerns, too.

The workers do not have road signs and the protective clothing, Chawatama says. For their own safety, we dont need them on the roads.

Of the roughly 88,100 kilometers (54,622 miles) of classified roads in Zimbabwe, about 17,400 kilometers (10,788 miles) are paved, according to data published by the African Development Bank Group in 2011. The road system has double the road density compared to Zambia to the north, and nearly three times that of Mozambique to the east, according to the Africa Infrastructure Country Diagnostic published by the World Bank.

City officials say volunteer road workers, including Chireka, pictured here, often cause more damage to roads than good. Drivers say volunteer workers wouldnt make repairs at all if the city did its job and fixed potholes.

Costs to maintain that road system are high. If the government chose to replace its road network, the bill would equal about $10 billion almost three times Zimbabwes GDP, data from the African Development Bank Group shows.

Just before elections they did some work because they wanted to impress, but now some of the works have been abandoned, he says.

Still, Shumba says, amateur repair crews shouldnt attempt to do the work themselves. Besides doing work that might not be up to par, they sometimes pose a danger to drivers.

Some of them have been accused of grabbing handbags from vehicles and threatening motorists, he says.

Mutizwa Munhamo, a driver, says the city needs to act and repair roads instead of pushing away the amateur repair crews.

If the responsible authority would just do its job and fix them, these people would not be there, he says.

Chireka, the amateur road repair worker, says police recently chased him away from the road. He says he knows that the city is technically in charge of fixing the roads, but he says he just wants to make ends meet.

I have four kids, he says. My family needs to eat.