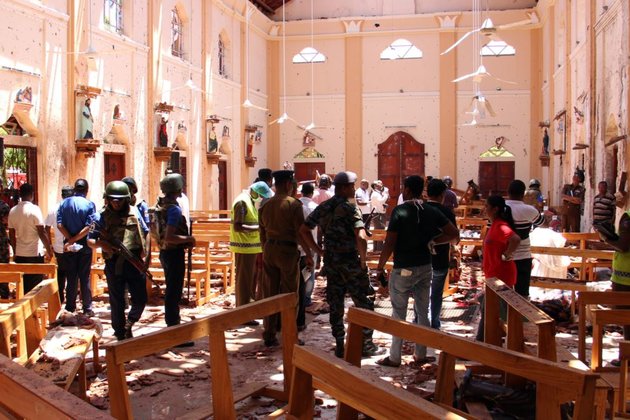 Several world and religious leaders condemned the explosions on Easter at Sri Lankan churches and hotels that killed scores of people.

Dozens of foreigners British, Dutch and American citizens are believed to be among them the dead.

'The acts of violence against churches and hotels in Sri Lanka are truly appalling, and my deepest sympathies go out to all of those affected at this tragic time,' she tweeted. 'We must stand together to make sure that no one should ever have to practice their faith in fear.

The Catholic Church in Jerusalem released a statement saying 'We pray for the souls of the victims and ask for speedy recovery of the injured, and ask God to inspire the terrorists to repent of their killing and intimidation.'

But during the traditional Easter address at the Vatican, Pope Francis conveyed sadness over the attacks.

'I want to express my affectionate closeness with the Christian community, attacked while it was at prayer, and to all the victims of such cruel violence,' he said.

Sundays bomb attack came a month after dozens of Muslims were killed in a shooting at two mosques in Christchurch, New Zealand. Prime Minister Jacinda Ardern such violence was 'devastating'.

'New Zealand condemns all acts of terrorism, and our resolve has only been strengthened by the attack on our soil on the 15th of March. New Zealand rejects all forms of extremism and stands for freedom of religion and the right to worship safely. Collectively we must find the will and the answers to end such violence, Ardern said in a written statement.

Heartfelt condolences from the people of the United States to the people of Sri Lanka on the horrible terrorist attacks on churches and hotels,' he tweeted.

The World Jewish Congress denounced the attack as heinous and appealed for zero tolerance of those who use terror to advance their objectives.

This truly barbarous assault on peaceful worshippers on one of the holiest days in the Christian calendar serves as a painful reminder that the war against terror must be at the top of the international agenda and pursued relentlessly,' World Jewish Congress President Ronald S. Lauder said.

Turkish President Tayyip Erdogan condemned in the strongest terms possible the Easter terror attacks in Sri Lanka. This is an assault on all of humanity. While Iranian Foreign Minister Mohammad Javad Zarif said terrorism must be condemned and confronted globally as is a global menace with no religion.

'Terribly saddened by terrorist attacks on Sri Lankan worshippers during Easter. Condolences to friendly government and people of Sri Lanka. Our thoughts and prayers with the victims and their families, he said.