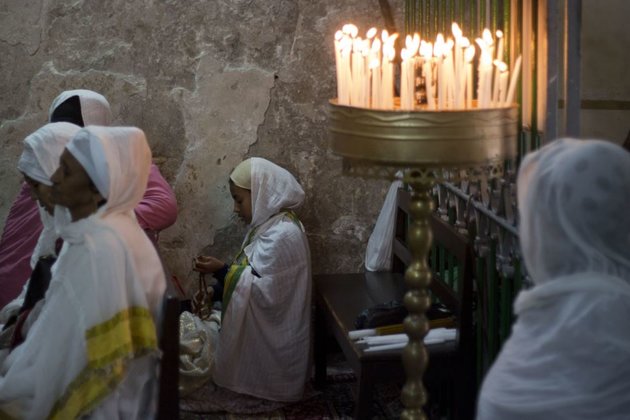 Many Christians observed one of the most important times of their religious year with a vigil Saturday night before Sunday's celebration of Easter, when the faithful believe Jesus Christ rose from the dead.

On the night of Holy Saturday, Pope Francis celebrates an Easter vigil at Saint Peter's Basilica, ahead of Easter Sunday Mass in the square. At the end of Mass, the pope will give his traditional blessing to the city and to the world.

Elsewhere, many worshippers participate in sunrise services to greet the first light of Easter Sunday. The day is marked by religious services, family dinners, treats for children and, in some cases, new clothes to celebrate the coming of spring.

On Friday, many Christian pilgrims participated in a ritual known as the Stations of the Cross. In Jerusalem, thousands of worshippers marched through the ancient, narrow cobblestone alleyways of the Old City, retracing what they believe is the route Jesus Christ took to his crucifixion.

Some of the faithful observed Good Friday by carrying large, wooden crosses on their shoulders. Others sang hymns and read Scriptures during the traditional procession, retracing the purported path of Jesus to the 14 Stations of the Cross. The route leads to Calvary, or Golgotha, also referred to as the Place of the Skull, where the Bible says Jesus died.

Pilgrims came to Israel from all over the world to celebrate one of Christianity's most sacred days, including Frank Caldwell from the U.S. state of Minnesota. 'I think it's always a feeling of walking in the footsteps of Jesus, and it's a very religious feeling and very good feeling to be here,' he said.

The procession culminated at the Church of the Holy Sepulchre, where many Christians believe Jesus was buried before his resurrection, which is observed Easter Sunday.

Israeli police and soldiers armed with assault rifles guarded the route, but the atmosphere was calm.

Good Friday coincided with the biblical Jewish holiday of Passover this year, and Israelis also flocked to Jerusalem to celebrate. Among them was Eddie Stern, who said 'Passover is ... an understanding of perhaps why Israel exists and the history of the Jewish people coming to Israel.'

Adding to the religious and cultural mix were Palestinian Muslims who attended Friday prayers at the Mosque of al-Aqsa, the third-holiest place in Islam.

Pope Francis marked Good Friday with the same ritual in Rome, leading thousands of Christians in the Stations of the Cross. This year, the pope asked an 80-year-old nun, Sister Eugenia Bonetti, who has devoted her life to rescuing victims of sex trafficking, to write the meditations for the 14 stops along the way.

Francis has called forcing women into prostitution 'a crime against humanity' and has urged Catholics 'to open their eyes' to victims. The aim of Sister Bonetti's meditations was to show the way in which Christ still suffers today.

Sister Bonetti's meditations also included reminders of other sufferers, whom she dubbed 'today's newly crucified' the homeless, the jobless, the hopeless, and the immigrants who are forced to live in poverty or danger on the margins of society.

She said the faithful should remember 'all those who even now are enduring crucifixion as victims of our narrowmindedness, our institutions and our laws, our blindness and selfishness, but especially our indifference and hardness of heart.'