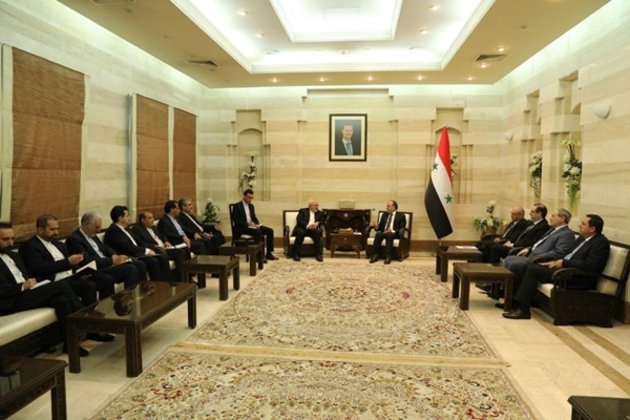 Syria to Give Priority to Iranian Firms in Reconstruction Era: PM

The top Syrian official made the remarks in a Tuesday meeting with Iranian Foreign Minister Mohammad Javad Zarif, during which the two sides exchanged views on mutual issues as well as regional developments.

The Syrian prime minister welcomed the Iranian top diplomat and paid gratitude to the Iranian nation and governments support for Syria. He also expressed sympathy with the families of the victims of the latest floods in Iran.

Khamis described the Iranian foreign ministers visit to Syria as significant and said the latest international developments require reinforcement of mutual ties between Iran and Syria.

The two sides should strengthen their ties because they are on the same front. Mutual ties in all areas should deserve the sacrifices made over the past years.

The top official said President Assad has underlined the priority of Iranian firms in the reconstruction era in Syria. The Syrian president has urged all sections of the government to use all their capacities to expand ties with Iran.

For his part, the Iranian foreign minister said Iran attaches significant importance to its ties with Syria.

We believe in this fact and have always declared it at international arenas that people across the world owe their security to the resistance of the Syrian government and nation against ISIS and other terrorist groups.

We are happy to have stood behind you throughout the resistance and the issue will be recorded in the history of mutual ties between Iran and Syria, he said.

Today, he added, the Islamic Republic feels duty-bound to institutionalize the achievements gained at the price of the bloods of resistance martyrs in their fight against terrorist groups in Syria.