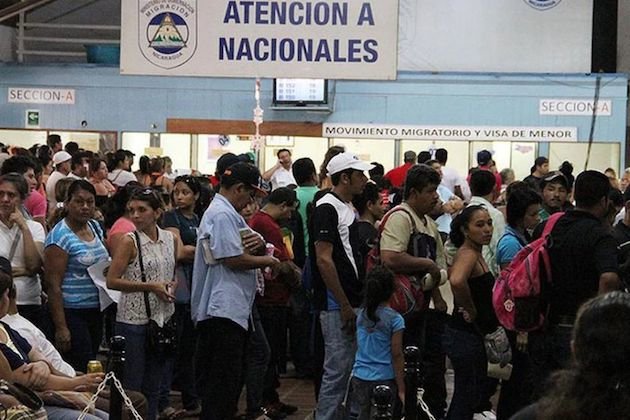 <p>MANAGUA, Nicaragua - More than 60,000 Nicaraguans have fled the Central American country in fear of their lives since anti-government demonstrations began last April,&nbsp;<a href="https://www.unhcr.org/news/briefing/2019/4/5cb58bd74/year-nicaragua-crisis-60000-forced-flee-country.html">UNHCR</a>, the UN Refugee Agency, said on Tuesday.</p><p>Doctors, journalists, students and farmers are among those fleeing the strife-torn country.</p><p>Echoing concerns from the UN&rsquo;s human rights office,&nbsp;<a href="https://www.ohchr.org/">OHCHR</a>, and others about the deteriorating situation in Nicaragua,&nbsp;<a target="_blank" href="http://www.unhcr.org/">UNHCR</a>&nbsp;said that families with young children are now taking extreme measures to cross the border.</p><p>&quot;The kinds of reasons that people have been giving for fleeing are the fear of losing their lives, being attacked or kidnapped by paramilitary groups,&quot; spokesperson Elizabeth Throssell told journalists in Geneva on Tuesday.</p><p>According to&nbsp;<a target="_blank" href="http://www.ohchr.org/EN/pages/home.aspx">OHCHR</a>, hundreds of activists have been arrested in Nicaragua in recent months in protests, while some 300 people reportedly died between April and August last year alone, the Office said in a 2018&nbsp;<a href="https://www.ohchr.org/Documents/Countries/NI/HumanRightsViolationsNicaraguaApr_Aug2018_EN.pdf">report</a>.</p><p>She noted that of an estimated 62,000 people who had fled abroad, 55,500 had sought refuge in neighbouring Costa Rica.</p><p>&quot;Some have received direct threats or have been persecuted; others fear for their lives because their communities have been a target of violence; or some, because their relatives are being sought,&quot; she said. &quot;So, we do feel that it is overwhelmingly a refugee flow.&quot;</p><p>Latest information from the Costa Rican authorities indicates that at least 29,500 Nicaraguans have filed asylum applications to date. UNHCR has commended the country&rsquo;s open-door policy, but noted that capacity to shelter everyone remains overstretched, meaning that 26,000 others are waiting to have their claims formalized.</p><p>&quot;The people who are fleeing are coming from different parts of Nicaragua and they are travelling to the Costa Rican border, trying to avoid contact with the police and paramilitary groups,&quot; Ms. Throssell explained. &quot;Some are travelling in trucks, hidden amongst sacks.&quot;</p><p>&quot;Among those seeking asylum are students, former public officials, opposition figures, journalists, doctors, human rights defenders and farmers,&quot; she said. &quot;A significant number arrive in need of healthcare, psychological support, shelter and food assistance.&quot;</p><p>Without a political solution to the crisis in Nicaragua, people are likely to continue to flee, UNHCR has warned.</p><p>Funds are urgently needed to strengthen the agency&rsquo;s humanitarian response to allow asylum-seekers in dire need of assistance to access aid, Ms. Throssell said, instead of having to resort to informal jobs to pay for somewhere to live, and food prices which are beyond their reach.</p><p>With the anniversary of the protests looming later this week, the head of the UN rights office (OHCHR), Michelle Bachelet,&nbsp;<a href="https://www.ohchr.org/EN/NewsEvents/Pages/media.aspx?IsMediaPage=true">said on Tuesday</a>&nbsp;that the Nicaraguan Government needed to ensure its security forces give citizens to right to assemble peacefully, and express their views freely.</p><p>&quot;I am concerned that the protests planned for later in the week may trigger another violent reaction,&quot; Ms. Bachelet said. &quot;Violations over the past year include the criminalization and harassment of -- and attacks on -- student leaders, human rights defenders, journalists and others critical of the Government. The authorities have also resorted to media censorship, bans on demonstrations, and persistent use of excessive force and large-scale arbitrary arrests by the police,&quot; she added.&nbsp;</p><p>&quot;Inevitably these actions, coupled with the lack of accountability for unlawful excesses by members of the security forces, have stoked rather than reduced the tensions in the country.&quot;</p><p>The UN human rights chief said she was also disturbed by reports of conditions faced by protesters who have been detained, noting that &quot;severe&nbsp;conditions&quot; in jails&nbsp;could amount to torture and ill-treatment.&nbsp;</p><p>She cited recent protests at La Modelo, a men&rsquo;s prison in Tipitapa, to the north-east of the capital Managua, where people were detained during the protests, who are being held alongside common criminals. The prisoners were reportedly violently repressed, through beatings, use of dogs and tear gas.</p>