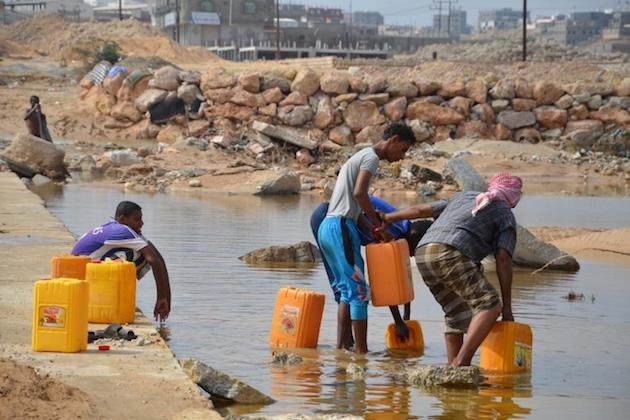 "End is nigh" in Yemen unless pledges are paid

<p>SANA&#39;A, Yemen - The humanitarian situation in Yemen is almost out of control as the UN battles to&nbsp;shore up much needed support.</p><p>The international community which generously pledged $2.6 billion in aid to address the crisis however have not followed through on their pledges. Of the $2.6 billion promised, only $267 million has actually been received.</p><p>UN Affairs Chief,&nbsp;<a href="https://www.unocha.org/about-us/ocha-leadership">Mark Lowcock</a>, via video-link, told the UN Security Council on Monday night that urgent action was required to save countless Yemeni lives.</p><p>He reiterated his earlier call for a nationwide ceasefire, adding that &quot;all the men with guns and bombs need to stop the violence. We again remind the parties that international humanitarian law binds them in all locations and at all times.&quot;</p><p>But bullets are not the only risk to life and limb he warned, citing that so far this year, 200,000 suspected cases of deadly cholera had been reported, almost triple the number for&nbsp;the same period last year.&nbsp;</p><p>&quot;We see the consequences of the destruction of the health system elsewhere too. More than 3,300 cases of diphtheria have been reported since 2018 - the first outbreak in Yemen since 1982. Earlier this year, new measles cases surged to nearly twice the levels reported at the same time in 2018,&quot; Lowcock said.</p><p>Looming over everything, the risk of famine continues, he warned, saying that the World Food Programme (<a target="_blank" href="http://www1.wfp.org/">WFP</a>) was upping the reach of support for the world&rsquo;s largest aid operation, from nine million a month, to 12 million&quot; in the coming months&quot;.</p><p>Access to the vulnerable remains a key challenge he said, making clear that grain that could feed 3.7 million hungry Yemenis in Hudaydah&rsquo;s Red Sea Mills, remained trapped due to conflict.</p><p><a target="_blank" href="http://www.who.int/en/">WHO</a>, he said, &quot;projects that 60 per cent of diarrhoea treatment centres could close in the coming weeks, and services at 50 per cent of secondary care facilities, could be disrupted.&quot;</p><p>&quot;We remain keenly aware that a sustainable peace - as Martin Griffiths has said many times - would be the most effective remedy for the humanitarian crisis in Yemen&quot;, Mr. Lowcock said. &quot;Without peace, we will simply go on treating the symptoms of this crisis, instead of addressing the cause.&quot;&nbsp;</p><p>&quot;Let me summarize. Violence has again increased. The relief operation is running out of money. Barring changes, the end is nigh.&quot;</p><p>The UN&rsquo;s Special Representative for Children and Armed Conflict,&nbsp;<a href="https://childrenandarmedconflict.un.org/about-us/special-representative/virginia-gamba/">Virginia Gamba</a>, focussed on how Yemen&rsquo;s most vulnerable had borne the brunt of war with a &quot;staggering&quot; figure of more than 3,000 children &quot;verified as recruited and used&quot;, while more than 7,500 were killed and maimed, with over 800 cases of humanitarian access denied, during nearly five years of fighting.&nbsp;</p><p>Almost half of those killed and maimed, she said, were victims of airstrikes, for which the Saudi-led coalition supporting the Government, &quot;bears the main responsibility&quot;.</p><p>On the ground however, &quot;the Houthis were responsible for the majority&quot; of casualties, predominantly through shelling, mortar and small arms fire.&nbsp;</p><p>Ms. Gamba said she had secured agreements with both warring parties during her time in office, to strengthen the protection of child lives, and to cut down on the recruitment of children as part of the war effort.</p><p>&quot;The violence Yemeni children have been subjected to - and still are - is simply unacceptable. I urge all parties to the conflict to take immediate measures to ensure that their military operations are conducted in full compliance with international law, including through respecting the principles of distinction, proportionality and precaution.&quot;</p><p>She too, called on the international community to prioritize funding for Yemen, &quot;in order to provide children with a chance to survive, learn, and construct the Yemen of the future&quot;.</p><p>The Stockholm Agreement had provided hope, &quot;yet as fighting continues and intensifies in parts of the country&quot;, said the Special Representative, &quot;I urge the parties to swiftly implement the commitments made. The tragedy of Yemeni children and their role in the Yemen of tomorrow emphasizes the need to put them at the heart of the peace process.</p>