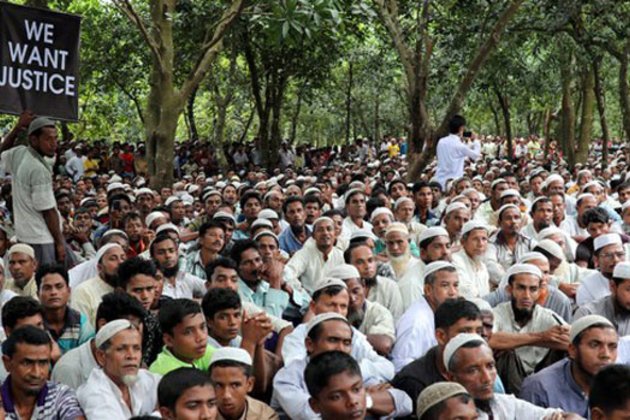 The U.N. human rights chief urged Bangladesh on Tuesday to halt plans to repatriate more than 2,200 Rohingya refugees to Myanmar, saying they were too terrified to go, while Bangladeshi officials said they hoped to start the process this week.

Michelle Bachelet, the U.N. High Commissioner for Human Rights, said her office was getting reports about alleged rights violations against Rohingya who stayed in Myanmar's Rakhine state after more than 700,000 people from the stateless minority had escaped to refugee camps in Cox's Bazar, Bangladesh, since August 2017.

"We are witnessing terror and panic among those Rohingya refugees in Cox's Bazar who are at imminent risk of being returned to Myanmar against their will," Bachelet said in a statement issued in Geneva.

"Forcibly expelling or returning refugees and asylum seekers to their home country would be a clear violation of the core legal principle of non-refoulement, which forbids repatriation where there are threats of persecution or serious risks to the life and physical integrity or liberty of the individuals."

Bachelet's statement came amid news reports that some Rohingya were fleeing from their shelters at refugee camps in southeastern Bangladesh out of fear that they would be forcibly repatriated.

"I went into hiding as soon as I came to know that they are looking for those whose names have been on the repatriation list," Mohammad Kashem, a refugee living at a camp on the Teknaf sub-district of Cox's Bazar, told BenarNews, an RFA-affiliated online news service. He was referring to a visit to the area this week by government officials and representatives of the U.N. refugee agency (UNHCR).

However, both Bangladeshi and Myanmar government officials have issued assurances that the repatriation process would be voluntary and no one would be forced to go back to Rakhine against their will.

Mohammad Abul Kalam, the Bangladeshi commissioner for Refugee Relief and Repatriation, said the process to start sending back more than 2,200 refugees slated for the first wave of repatriation should begin as planned on Thursday.

"Hopefully, some people will want to return," he said.

"[N]ot a single Rohingya will agree to return to Rakhine at this moment. The situation in Rakhine is not conducive to repatriation. If they return, they would be tortured, killed or confined to concentration camps," Kamal told BenarNews

He said the Myanmar government must take some confidence building measures to create a conducive atmosphere for repatriation.

"Myanmar must allow the international observers, agencies and journalists to report whether Rakhine would be safe for the Rohingya," Kamal said.

In Dhaka, Bangladesh Foreign Secretary M. Shahidul Haque said he hoped the process would start on Nov. 15, as was agreed in a recent meeting of a joint working group of Bangladesh and Myanmar officials.

"We are hopeful about the repatriation. Let's see what happens," Haque said on Tuesday, according to the state-run BSS news service.

On Monday, another senior Bangladeshi official said that no Rohingya would be forced to go back to Myanmar. The government had asked UNHCR to assess whether any refugees were willing to return to Rakhine, but the U.N. agency had not yet given Bangladesh this information.

"Our policy is we will not send any Rohingya back by force. It is the decision of the individual Rohingya whether they want to get back," the foreign ministry official, Delwar Hossain, told BenarNews on Monday.

Firas Al-Khateeb, a spokesman for UNHCR in Cox's Bazar, confirmed on Monday that the government had asked the agency to assess whether any of the refugees on the list of more than 2,200 identified for repatriation were willing to leave Bangladesh.

"Our position is clear, we don't believe that conditions are conducive for return at this moment," he told Benar then.

Meanwhile, the Brussels-based International Crisis Group published a report Monday saying that both Bangladesh and Myanmar viewed a limited repatriation as serving their interests.

Bangladesh officials, the report said, "appear to be banking on the fact that they will alarm donors and prompt them to focus more on the situation and realize the status quo is unsustainable."

Myanmar, for its part, "hopes that a small number of returns would demonstrate to a skeptical world that it is ready to welcome Rohingya back, shifting the focus away from the reasons why they originally left - and thereby weakening, it believes, the basis for claims of ethnic cleansing and genocide."

In other developments, the leader of one of Myanmar's neighbors expressed criticism on Tuesday about de facto leader Aung San Suu Kyi's efforts regarding the Rohingya humanitarian crisis.

Malaysian Prime Minister rebuked Suu Kyi as he spoke to journalists on the sidelines of the Association of Southeast Asian Nations (ASEAN) summit in Singapore, according to media reports.

"It would seem that Aung San Suu Kyi is trying to defend what is indefensible," Mahathir said, according to Reuters news service. "We are very disappointed, because someone who has been detained before knows the sufferings, and should not inflict it on others."

In addition to Mahathir's comments, an ASEAN chairman's statement was expected to take a hardline stance against Myanmar, calling for all those responsible for the alleged atrocities in the Rakhine state to be held fully accountable, Reuters reported after seeing a draft copy.

The statement could change when delivered by Singaporean Prime Minister Lee Hsien Loong. Singapore, one of ASEAN's 10 member-states, currently holds its rotating chair.