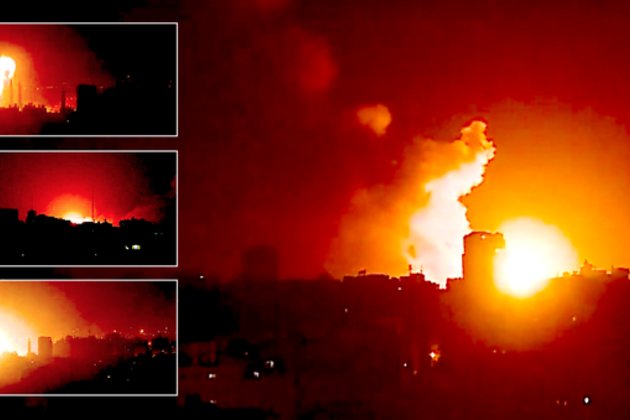 GAZA - A day after Israel's undercover operation into the Gaza Strip ended in failure and left seven Palestinians dead - an intense barrage of rockets were fired into southern Israel, provoking retaliatory action.

On Sunday, an Israeli lieutenant colonel and seven Palestinian gunmen, including a local Hamas commander were killed after Israel's Special Forces led a botched incursion into the Gaza Strip.

The Islamist group Hamas - that has controlled the Palestinian enclave in the Gaza Strip for the past decade - claimed that Israeli undercover forces entered the territory in a civilian vehicle late on Sunday and exchanged fire with Hamas gunmen.

Members of Hamas' military wing - the Izzedine al-Qassam said that they discovered the car in which Israeli undercover forces were traveling and chased the vehicle as it headed about 2 miles into southeastern Gaza.

According to Hamas, the Israeli special forces then shot and killed Nour el-Deen Baraka, who is a mid-level commander in the town of Khan Younis.

Following Hamas' statement, the Israeli military did not comment on the incursion directly, but said that there had been an exchange of fire during an operation in Gaza.

Israeli military said that its troops were withdrawn from the territory by an aircraft.

In a brief statement, the Israeli military chief Lt. Gen. Gadi Eisenkot said that a "special force" carried out "a very meaningful operation to Israel's security."

While the Israeli military spokesman, Lt. Col. Jonathan Conricus did not offer exact details, he said that the operation was "not intended to kill or abduct terrorists but to strengthen Israeli security."

The spokesman added that the force faced a "very complex battle" and was able to "ex-filtrate in its entirety."

However, the Israeli incursion provoked an intense cross-border flareup, merely days after both the sides claimed to have agreed on indirect deals to allow cash and fuel into Gaza.

The deals, aimed at preventing deterioration of conditions in Gaza, were backed by Qatar, Egypt and the United Nations that have been trying to broker a long-term ceasefire between Israel and Hamas.

Late on Sunday and on Monday morning, Palestinians from the militant-controlled enclave responded to the botched raid by launching a salvo of rockets into southern Israel.

The Israeli military said that about 200 rockets, mortar bombs and at least one anti-tank missile had been launched into southern Israel from the Gaza Strip, sending sirens blaring across the region.

The military added that about 60 of the 200 rockets were intercepted by the Iron Dome missile defense system.

However, several rockets rained down on Israeli communities and a guided missile reportedly hit an Israeli bus, destroying the vehicle.

In a statement, Israel's national emergency service said that a 19-year-old man suffered critical injuries after the rocket strike on the bus.

Further, United Hatzalah, a volunteer-based emergency service said that crews were dealing with a high volume of calls from people suffering from injuries and emotional shock following the rocket attack from Gaza.

Officials said that ten Israelis were treated for injuries related to rockets from Gaza.

Later in the day, the Israel Defense Forces posted a video on its Twitter page, which showed destroyed houses and buildings and wrote, "LOOK: This is one of the multiple Israeli homes hit by rockets fired from #Gaza. Yes, HOMES. Plural. Terrorists in Gaza are targeting Israeli civilians. We are targeting the terrorists."

The Israel Defense Forces also wrote in a tweet, "Our fighter jets have started striking terror targets throughout the Gaza Strip."

Through the day, Israeli authorities said that the rocket strikes had forced the closure of a railway line between two communities neighboring Gaza.

The Israeli military also announced that troops and its aerial defense system along the border had been reinforced following the flare-up.

Late on Monday, the Israeli Prime Minister Benjamin Netanyahu's office held a meeting with senior security and military staff over the escalation in violence.

Following the botched operation on Sunday, Netanyahu rushed back to the country, cutting short his trip to Paris, where he participated in commemoration ceremony to mark 100 years since the end of World War I alongside leaders and state heads from across the world.

In response to the escalating violence, Netanyahu said that he was hoping to reach an "arrangement" to ease Israeli-blockaded Gaza's economic hardships and avoid further conflict.

Commenting on the intense strikes, the U.S. issued a statement condemning Hamas.

The U.S. envoy Jason Greenblatt tweeted, "We stand with Israel as it defends itself against these attacks. This violence prevents any real help for the people of Gaza."

Meanwhile, Hamas has said that three Palestinian gunmen were killed in the Israeli air attacks.

Fears that a dangerous escalation of violence on the frontier will provoke another deadly conflict between Israel and Hamas - that have fought three wars in the past decade - hit a peak this year.

Earlier this year, Palestinians began staging weekly protests demanding rights to land lost to Israel in the 1948 war of its creation.

The weekly protests have led to several violent flareups along the Israel-Gaza border, due to breaches of Israel's border fence and anger over the death of over 220 Palestinians since the start of the protests in March this year.

Last month, Israeli warplanes bombed about 80 targets across the Gaza Strip, in an apparent response to a barrage of rockets fired into Israel from the blockaded enclave.

So far, it is unclear if the latest escalation in violence will derail the recent indirect deals to allow cash and fuel into Gaza.